Karachi is under the grip of heat wave 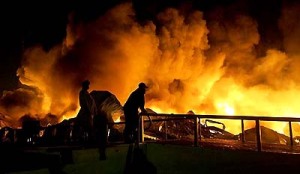 NO, there had been no arson attack, political attack or any other type of crisis that is burning Karachi. The truth is that for the last couple of days nature is making Karachi sweat badly. Intense heat has gripped coastal Pakistan since the beginning of April. Is it a April fool’s gift from the nature?

Karachi is out of the frying pan, into the fire

Temperatures are 2ºC to 4ºC above normal at along the Sindh & Makran coast since last few days.  The reason? Western disturbance that is bringing rainfall to upper Pakistan including Islamabad has caused winds direction to change, normally in summer winds blow from South West direction ( Sea breeze)  in Karachi but the western system has caused dry winds to blow from Upper Sindh and Balochistan, North Western winds have brought dry air from the desert regions of Balochistan and Sindh.

Change in wind direction on April 1 (Friday) pushed up the city’s maximum temperature from 32ºC to 38.5ºC increasing by more than six degrees and turned the weather extremely dry, humidity too dropped from 60% to just 8%. On April 2 (Saturday) conditions were same, temperature remained at 37ºC  and on April 3 (Sunday), temperature has dropped to 36ºC.

Light at the end of the tunnel for Karachi

It could take two days (48 hours) for this heat spell to break as South West winds will revive by Monday night as the western system will enter India by that time. A new western disturbance will affect Upper Pakistan from Monday night that will bring partly cloudy weather for Karachi to much of Pakistan, humidity will also increase during that period in Karachi breaking the dry period.

Karachi was toasted in 1979

The residents of Karachi experienced the hottest April on 26 in 1979 when temperatures soared to 43ºC. At least at that time load-shedding was not a major problem!

12 thoughts on “Karachi burns under fire!!”