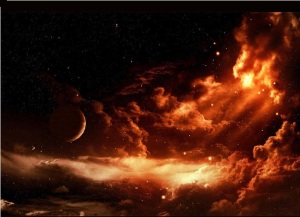 “Red sky at night, sailor’s delight” or “red sky in morning, sailor’s warning” these are some of the famous weather lore. Weather lore is an informal folklore about the prediction of weather. In the older times, when there were no satellites, weather instruments and many other things, people used to see or look at the skies for predicting the weather. This method was used especially by farmers, fishermen, shepherds and other people related to such fields. These people made phrases like “Red sky at night, sailor’s delight”, to tell and forecast weather. Any one listening to these phrases at that time used to understand what that person is saying. This is called weather lore and it is still highly famous in the western nations especially England. In Pakistan, during the time before the cyclones, many local fishermen follow the height of sea, which PWP made it sound like this;

There is no doubt in this saying, but during the time of storms, fishermen ignore the warnings of professionals and follow their old-wives tale and weather lore like the mentioned above, which is indeed dangerous and should be avoided every time, especially during this age of technology.

Red sky phenomena from European history to the Holy Bible

Red sky and the Holy Bible

This weather lore can be found in every part of literature of the European nations, from Italy to Britain. All of them have same meaning with slight variation of words. Italian variation, which translates to, “Red at night, good weather is hoped, red in the morning bad weather approaches“.

This weather lore has also been mentioned in the Holy Bible, in which Jesus is seen using this phrase. In the Bible, Jesus says to a fishermen;

William Shakespeare, he is often called England’s national poet and the “Bard of Avon“, in his poem Venus and Adonis wrote:

Like a red morn that ever yet betokened,
Wreck to the seaman, tempest to the field,
Sorrow to the shepherds, woe unto the birds,
Gusts and foul flaws to herdmen and to herds.

There are many proverbs and stories concerning the weather from mediaeval England. For example, the notion that the weather on St. Swithin’s Day (15th July) predicts the weather in England for the next 40 days:

The red skies – and the real reason behind it

Weather system usually moves from west to east, blown by the westerly trade winds. This means storm systems generally move in from the West. The colors seen in the sky are due to the rays of sunlight being split into colors of the spectrum as they pass through the atmosphere and ricochet off the water vapor and particles in the atmosphere. The amounts of water vapor and dust particles in the atmosphere are good indicators of weather conditions. They also determine which colors will be seen in the sky. When the sun is low in the sky, at dawn and dusk, sunlight travels through more atmosphere than at other times of day. The red wavelength is better able to go on a direct course and be reflected back off clouds, whereas the blue light is more scattered before reaching the cloud and is therefore less visible. So, we see the clouds as red as the light that is reaching them is primarily red. There are many variations on this piece of lore, but they all carry the same message.

When we see a red sky at night, this means that the setting sun is sending its light through a high concentration of dust particles. This usually indicates high pressure and stable air coming in from the west. Thus the weather will remain fair in the coming days. When you see red sky in morning that is because a red sunrise reflects the dust particles of a system that has just passed from the west. This indicates that a storm system may be moving to the east. If the morning sky is a deep fiery red, it means a high water content in the atmosphere. So, rain is on its way.

Do not risk your life!

This might be true some time, while false the other time. Modern meteorology has given reason now to fully explain these phrases and has made it clear that don’t risk your life or well-being based on weather lore and proverbs. Forecasting and predicting weather like this is not at all scientific. People all over the world including Pakistan should follow professionals. So don’t follow these weather folktales!

4 thoughts on “Red sky in the morning or at night!”