New Delhi was once regarded as a peaceful city with smooth and clean-fuel transport but the skyrocketing use of motors has left the city with high level of air pollution. It might be the alpha city but the Indian capital can not get any dirtier because a study shows that the level of pollution over Delhi is rising at an alarming rate. Although the climate all over the world is changing but Delhiites are one step ahead as six million cars move on the roads of this historic city along with large amount of burning garbage and festivals related to fireworks.

North-western India usually witness haze and fog-like conditions from late November till early February but December is regarded as the most polluted month in the Delhi. It is not only north-western India’s problem but here in northern and central eastern Pakistan, haze and fog have started to become deeper and deeper as time passes by.

Most polluted cities of the world

Why does this happen the most in Winter?

In winter, pollution level rise due to the lowering of the inversion level. The air in the months of winter is cooler at the surface and could not rise above, however the air above the surface is slightly warm. In summer months, warm air usually move upwards and causes polluted particles to dissipate.

Another reason is that the wind becomes calm because of which pollutants remain suspended in the atmosphere that are further strengthened due the moisture left by western systems. These weather systems also increase the level of humidity over the city

Its not just New Delhi, its whole India! 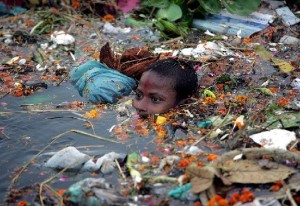 Yes it is not just Delhi but just south-east of the city, Agra too suffers from the same problem. Pollution has turned the 17th century Taj Mahal in yellow colour. To help control the pollution, the Indian government has set up the Taj Trapezium Zone (TTZ), an area around the monument where strict emissions standards are in place. The coastal city of Mumbai is the most populated as well as the most polluted mega city of India, scattered garbage and stinking air is nothing new  for this coastal city. There are some places in Mumbai where no visitor would even go to visit due to the stinking atmosphere.

Coming back to New Delhi, recent development has been regarded as the major source for rise in India. The alarming growth in the number of vehicles in Delhi as a major threat as everyday over 1000 vehicles are increasing on the roads in Delhi. The city is usually full of fog due to heavy traffic, and industries throw 3,000 ton of pollutants into the air every day. The system that monitors the air quality which usually records pollution on the scale from 0 to 500, has recorded the highest of 476 level of pollution over Delhi.

The World Health Organization estimates that 1.34 million people died in 2008 from breathing in the tiny particles present in the atmosphere, so dont let the pollution affect your life!