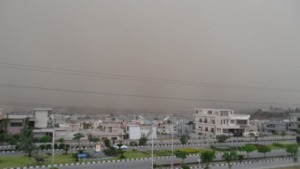 Everyone remembers the oppressive heat of the year 2005 and the near drought conditions experienced in 2006 in most parts of the country. Remarkably below normal rainfall in 2006 and less than 28 noticeable storms in the twin cities of Rawalpindi/Islamabad left things quite uneventful. But then came the year 2007; initially, the year brought some good rains in the winter and spring had a few impressive dust/thunderstorms. And then the monsoons started to penetrate the country that spiced up the year way more than anyone ever expected especially up in Northern Punjab and Northern parts of Khyber Pakhtoonkhwa. (Picture shot at Bahria Town, Rawalpindi, a massive dust/thunderstorm engulfing the twin cities of Rawalpindi/Islamabad. Travelling at 157 km/h (wind speed 85 knots at Chaklala, Rawalpindi (Islamabad Airport)

With an average June came July of 2007, the best year by far, I have seen for thunderstorms that rumble with all their majesty. On 6 July 2007, at 1:35 AM, anyone in Rawalpindi outside can notice a sound that seemed like several loud freight trucks were coming towards you and then the wind storm struck with gusts of 150 km/h (I decided it wasn’t a good idea to be out in the open!).  Things falling and breaking all over! However, as more monsoon winds moved into the country, it alarmed meteorologists that this isn’t the end; the second week of July had 3 more severe thunderstorms accompanied by straight-line wind that could blow you away LITERALLY! Following a very similar pattern of night time thunderstorms on the 8th, 12th and 14th of July, 3 wind storms from westerly direction, each storm capable of dumping 30-75 mm of rain came along with 95, 148, and 139 km/h wind gusts! WOW, was that amazing!!!

Wunderground.com link can show you the conditions here on this link http://www.wunderground.com/history/airport/OPRN/2007/7/6/DailyHistory.html

August also had three storms with wind speeds in the hurricane force range, but the cherry on the top was that Rawalpindi/Islamabad received more rain than Murree! Chaklala, Rawalpindi had an accumulation of whooping 1828 mm for the year while Islamabad Zero point weather station recorded 1850mm, I lived in the southern part of town which is relatively drier and calculated a total of 1524 mm rainfall for the year. To this date, the best year for rains, storms and the drama it drags along. Not only did these storms lash out with furry only known to God, but these storms were quite stealthy on timing, as it was hard to predict when a thunderstorm like this would actually strike!