‘Monsoon brings flood no matter who is running the city’

Karachi: The mixture of East and West

Today’s crisis-hit Karachi was once considered a peaceful and clean city in the British India, it was upgraded to a city by the British government therefore we see the city’s old architecture having a striking resemble’s to some European cities. 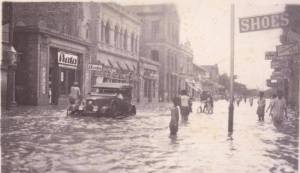 The above picture is taken in 1944 but the year and the date is not known neither the location but it can be said that the picture was taken during the monsoon season. According to the data collected from Indian Meteorological Department (IMD), on 27 July 1944, a cyclone left some 10,000 people homeless in Karachi, the picture might not be related to the cyclone.

However a news article from Pakistan’s Dawn Newspaper shows that very heavy downpour occurred on August 2, 1944 as 162.4 mm rain was recorded which is the highest rainfall for August.