A dust storm is a type of a windstorm that sweeps cloud of dust across an extensive area. Some meteorologists tend to differentiate between a dust storm and sandstorm. They argue that a dust storm consists of strong winds and pollutants blowing over an arid or drought-hit area. Whereas, a sandstorm mainly occurs in a desert composed of sand particles (WeatherNation, 2016). It is worth-mentioning that both of these storms are a category of windstorms and can be a result of a jet stream or thunderstorm. Since, the composition of sand and dust particles is distinct hence it needs to be analyzed to determine whether the winds blowing are a dust storm or sandstorm.

Karachi’s dust storm is a result of westerlies and easterlies

Given that Karachi is surrounded by arid areas in Balochistan in the west while Thar desert in the north east, it is difficult to determine whether these winds are dust storms or sand storms or even a combination of both. For convenience of our readers, we will call such winds ‘dust storms’ until a reliable research is published.

Dust storms, locally called Andhi which is a Urdu and Hindi word for dust-raising winds, are common in Karachi.  The city experiences such winds two times in a year, one in the summer and one in the winter. 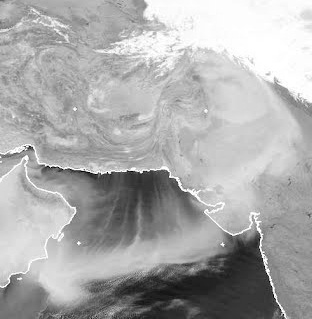 A monsoon depression moving towards Sindh from India in May 1986

Cyclone Tauktae and Western Thunderstorm in 2021 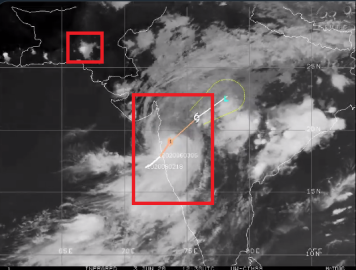 Cyclone Nisarga and Western Thunderstorm in 2020 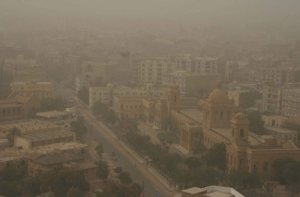 A Dusty day in Karachi

Following is a list of some dust storms that occurred in the city;