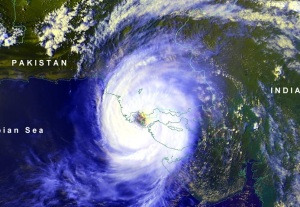 My earlier post of “Where is my house”, he said was a story about a family that was effected by a cyclone called “2A” that brought death and destruction to lower and coastal Sindh. Cyclone 2A was a rare storm that formed in May 1999 in the Arabian sea. Last cyclone of this intensity occurred a year eariler in 1998 but that cyclone was some what weaker than “2A”, though both of these storms were category-3 and they even had same path but the 1998’s cyclone formed in June and it made landfall in the Indian state of Gujarat than Sindh. It is the strongest and most powerful cyclone ever in the history of Pakistan. It is the strongest cyclone to make landfall at peak intensity in the Arabian sea. It was a category-3 hurricane at the time of its landfall with winds up to 125 mph gusting to 171 mph.Storms like 2A are very rare in the Arabian sea but duing the late 20th century and early 21st century there had been number of intense cyclones in the Arabian sea.

Destruction by the cyclone in Sindh

A boy collects his belonging after the cyclone hit the village

The cyclone killed at least 6400 people in Sindh. Many areas of coastal Sindh were flooded when 278 mm rainfall occurred with 125 mph winds that were gusting to 171 mph. At least 70% of the rice crop was estimated to have been lost due to the cyclone. Throughout the province, damage was estimated to have exceeded $6 million. The world leaders and political parties in Pakistan criticized the then-government of Pakistan for their poor performance. The Government was also attacked by the political leaders as they made no efforts to evacuate the people ahead of the deadly storm. At least $1 million in relief funds was to be supplied by the government due to intense pressure from the opposition.

How did cyclone form in the Arabian sea

Formation of a cyclone

An area of thunderstorm first erupted in the Arabian Sea in early May 1999 near Bombay, there were some predictions that it may achieve cyclone status in late May. By May 16, low wind shear and high sea temperatures made it possible for the low pressure to intensify into tropical storm “2A”.  The cyclone further intensified as it moved to the northwest and became a category-2 hurricane on May 17. At that time, a mid-latitude trough weakened the subtropical ridge, allowing the cyclone to curve into Pakistan. The cyclone reached a category-3 (major hurricane) on May 19 as it had reached its peak of 125 mph (205 km/h), just below Category-4 status on the SSHS scale.

On May 20, the storm made landfall at peak intensity just missing Karachi. The storm weakened significantly due to land interaction on May 21 and became a low pressure area and finally dissipated on May 22 over Pak-indo border.

Waves generated by the cyclone crashes the sea coast of Karachi

Some weather models predicted that Karachi will be the likely target but the cyclone missed Karachi by just 100 miles and made landfall at peak intensity over Shah bandar. Though the cyclone forced the closure of seaports and few flights were delayed otherwise Karachiites were unaware of the storm’s presence and were taken by surprise that such a powerful cyclone has just missed them. Cyclone however did cause moderate to heavy rainfall with winds of 44 mph on May 20 in Karachi.

What climatic effects it had on Pakistan?

Much of Pakistan was passing through a severe drought period from 1996 till 2002. The cyclone brought some rainfall to many places of Sindh thus easing some effects of the drought.