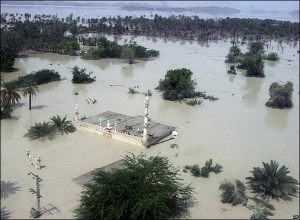 A mosque is submerged after Cyclone Yemyin made landfall in Balochistan

Pakistan has a 1,046-kilometre (650 mi) coastline along the Arabian Sea and the Gulf of Oman in the extreme south western part of the country. Though cyclones are rare in the Arabian sea, cyclones that form in this sea mostly move towards Indian state of Gujarat rather than Pakistan.

Cyclones form in which month? 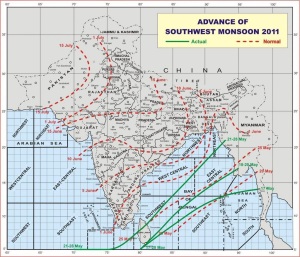 Cyclones in the Arabian sea form mostly from May till June and then from September till October, monsoon season plays a vital role for the formation of cyclone in this basin. Tropical storms that hit Pakistan are mostly remnants by the time reach pakistan or make landfall in south eastern Sindh which is not very much populated they rarely move towards the Balochistan coast.

Is there any Cyclone warning centre in Pakistan?

There is only one warning centre in Pakistan that is situated in Karachi. That too I suppose might be out of order.

Cyclones that effect Pakistan lose much of their intensity by the time they reach country’s coastline. Following are the deadliest cyclones in Pakistan’s history, these cyclones caused fatalities greater than 100.

Not much is known about this cyclone but it is the deadliest tropical storm in the history of Pakistan as it caused 10,000 casualties in Karachi on 15 December.

This cyclone is the strongest and most intense cyclone in the history of Pakistan. A category 3 hurricane, it killed 6200 people in the country and made landfall in Shah Bandar at peak intensity on 20 May near Karachi city in Sindh province.

It killed 200 people alone in Karachi city on 23 June due to heavy rainfall and intense windstorms of 70 mph. It made landfall near the towns of Ormara and Pasni in the Balochistan province on 26 June where it killed 300 people. Overall it killed 730 people and affected the lives of 2 million people in Pakistan making it the third deadliest cyclone in the history of the country.

A category 1 hurricane, it weakened over the sea near Sindh-Gujarat border due to high wind shear. However it caused massive rainfall and flooding in Karachi but Thatta and Badin districts were the worst affected where the cyclone killed 609 people and displaced some 200,000 others.

It made landfall in Tharparkar and Hyderabad district in Sindh province in Pakistan on 12 June. However it caused a great loss of life and property in the province. It killed 450 people and left some 400,000 people homeless. 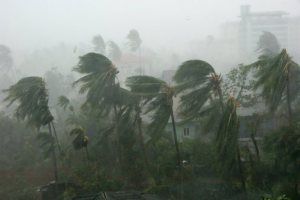 What does history tell us

It tells us that cyclone do occur in Pakistan, we have to prepare ourselves to avoid major disasters as these nature’s beast are likely to increase in the years ahead – thanks to global warming.

7 thoughts on “Detailed history of Cyclones in Pakistan”