Snowfall over mountain - Dry surface over land: one in two!

The driest place on the planet Earth is the Atacama Desert, there is no doubt in that. This desert is a plateau in South America, covering a 600-mile strip of land on the Pacific coast of South America.

The Atacama desert is found along the coast of Chile, South America – right next to the Pacific Ocean – the biggest body of water in the world. Much of the desert extends up into the Andes mountains and is very high in elevation. Unlike more familiar deserts, like the Sahara desert in Africa and the Mojave in California, the Atacama is actually a pretty cold place, with average daily temperatures ranging between 0°C and 25°C.

What really happened to the “Mars” of Earth? 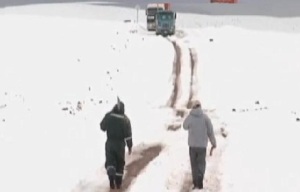 Snowfall created havoc in the desert

Cold wave brought heavy snowfall to the Atacama desert, a region known for being the driest place in the world. The area had not seen this amount of snow in close to 20 years, almost two decades. Some areas received up to 80 centimeters (32 inches) of snow, leading to closed roads and stuck vehicles. 36 people were rescued on July 5, all of these people were in bus whose vehicle was stuck in heavy snowfall. The people were forced to bear below freezing temperature till they were rescued.

The “rare” snowfall caused all major and local roads to be closed down. Temperature in Santiago, Chilean capital dropped to minus 8 C. The temperatures were not just felt in Chile but neighbouring Argentina and Uruguay also shivered due to freezing temperatures.

Is this event rare or just another hype?

Atacama desert gets below average 50 mm of rain each year. Some weather stations in this part of the world only gets 1 mm to 3 mm of rain each year, while some have never ever experienced any kind of precipitation in their life time. According to NASA, it is the driest desert in the world, due to the rain shadow on the leeward side of the Chilean Coast Range, as well as a coastal inversion layer created by the cold offshore Humboldt Current.

Some areas of this desert have not seen rainfall for 400 years, but being a desert that does not mean that temperatures remain high all year round but from June till August, temperatures reach below freezing level.

What is the climate of this desert?

This part of planet experiences summer during the month of January till March, temperatures reach 27°C to 32°C while minimum temperatures are 16°C. In winter season that is from June till August, the day time temperatures reach 22°C while the night temperature are 4°C, rarely reaching rarely minus 2°C. But this event was extremely rare and another one will occur many many years ago. So does it rain here?

Yes it does. Every so often a warming effect over the Pacific Ocean around the equator changes the weather the world over and even places like the driest desert in the world can become doused with drenching storms. Even though Atacama gets almost no rainfall, there is water in this arid place. The snow over the mountains and creates small lakes, it is said that thousand years ago or more, there were river beds on this desert, so where did they go now!