Pakistan and India, these are the two nations in the world that do not have an easy relationship. The Pak-Indo relations were never friendly in their 64 year life. The two nations were divided in 1947 from greater India before that, they were ruled by the Britishers. Since the independence the two countries have blamed each other for any unrest in the country. For a neutral observer, both the countries are equally blamed for high tension between them. But in June 2007, the Indian government’s India Meteorological Department (IMD) did a wicked and shocking thing that led many international weather experts and some newspaper to criticize the IMD. What was it? It was Cyclone Yemyin! 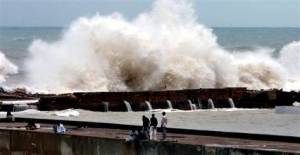 After 4 years of cyclone Yemyin, most Pakistanis do not know much about this storm. Most shocking and amazing thing is that a private Pakistani T.V channel was showing the destruction left by Yemyin but in the end they made a horrible mistake, they thought that cyclone “Yemyin” came from Yemen, African country, that is why this storm is called “Yemyin”. If this storm did came from Yemen then I think that all the laws of physics are wrong as cyclones do not move from South to North for a very long time. Simiarily the PMD also made a mistake regarding Yemyin. During the time of cyclone Phet, the PMD issued a list of cyclones that formed in 2007 and affected the Pakistani coast. But instead of writing cyclone Yemyin that wrote Yemen cyclone, Yemen cyclone formed in 2008 that too in October, eventually they  corrected it in early 2011. It appears that many people in Pakistan were confused with these two cyclones.

Both are different storms, one has been named Yemyin in 2007 while the other was a formed near a country in 2008 called Yemen. However that 2008 storm did not achieve cyclonic strength. It was cyclone Yemyin in 2007 that had an interesting story.

Does IMD monitors the cyclones in this part of the world?

What did the IMD do regarding Yemyin?

A deep tropical depression from the Bay of Bengal crossed into the Arabian sea on June 24 and was being monitored by the Joint Typhoon Warning Center (JTWC), a center that is led by the United States. The JTWC and the IMD both started resuming warning for this system but the JTWC upgraded the system to a strong tropical storm status with winds up to 60 mph gusting to 80 mph according to SSHS, while the IMD kept the system at deep depression status with winds up to 35 mph. The JTWC gave the name “nameless” to the cyclone keeping international steps in mind, while the Pakistan Meteorological Department (PMD) forcefully named it “Yemyin“, their advisory told this on June 25 at about 8:00 pm PST;

Thus Cyclone Yemyin came to existence and finally got a name that it desperately needed since many days. So What, if the IMD did not name the cyclone? Naming a storm is very important, the cyclones that are named will attract much attention in the global media than a nameless one. People easily forget storms if they are named like 4B in 1998 or 4B in 2010, thus the tradition of naming the cyclones were introduced by western powers. The plan of IMD? well, Yemyin was very destructive in Pakistan and by not naming the storm was not making any story in any part of the world like previous disasters did. Though thanks to the JTWC, PMD, international weather experts and bloggers, Yemyin made it to the international press and finally the world started monitoring the situation in Pakistan.

Though even in the Indian media, Cyclone 03B was being referred to as Yemyin. Media outlets like Times of India and Hindustan times used the word “Yemyin” to describe the cyclone, not knowing that their met department still considers it as a mere depression. India might not have felt good to provide storm warnings for Pakistan but it is their job to do so and India should not let international politics interfere with any humanitarian work.

IMD issues its update on June 25

Cyclone Yemyin made landfall on June 26 along the Makran coast in Pakistan’s Balochistan province, according to famous weather bloggers of Weather Underground, Dr. Jeff Masters and Margie Kieper, both were shocked and disgusted by the attitude of the IMD. These weather experts were following and monitoring this storm from time to time. Dr. Jeff has this to say;

Cyclone 03B was at least a strong tropical storm when it hit Pakistan, and was probably a Category 1 hurricane….Yet IMD never even gave the storm a name, and merely classified it as a a “deep depression,” with winds less than tropical storm force (39 mph). At 00 GMT June 26, two hours before landfall, the position of Cyclone 03B given by IMD was probably in error by at least 60 miles. One hour later, at 01 GMT, with landfall just one hour away, the IMD shipping advisory said that landfall was still 12 hours away. The IMD website, with the warnings, was offline and not available for approximately twelve hours beginning with the landfall period. It’s important not to judge IMD before all the facts are known, but I can’t fathom any excuse that can account for what appears, at best, to be criminal incompetence.

While Margie Kieper, hurricane hunter and blogger had this to say;

“Can you imagine this happening in the U.S? A hurricane hitting land and leaving thousands homeless, not warned on, and the warning agency website (IMD) down throughout the critical landfall period? This truly is unimaginable – yet this is what occurred yesterday … complicating this event is a history of hostility between India and Pakistan.”

The Indian Meteorological Department (IMD) showed a careless attitude towards Pakistan in 2007, even though the two countries had good relations in 2007. However, this is unacceptable that IMD’s cyclone warning website was offline throughout the critical period. Was there a load-shedding going in the future super power capital New Delhi?, they forecasted that landfall of this “depression” was still 12 hours away while the weak “category-1 hurricane Yemyin” was one hour from making a landfall and also the IMD showed a wrong track of this storm in 2007. If the IMD can not provide warning to its neighbours than it should resign from the post of Regional head as that is their job to do so.

Aftermath: Name 03B or 04B as Yemyin – IMD under pressure!

Yemyin destroys a high in Pakistan

In late June 2007, a deep depression 04B formed on June 28 and was being forecasted to become a cyclone, it was a deep depression on IMD scale and a weak tropical storm on SSHS scale. There was lot of tension if that 04B becomes a tropical storm on IMD scale, so what will happen to 03B? eventually 04B did not have time to become a cyclone but its remnants brought once again heavy rainfall to coastal Pakistan. If the 04B would have been named “Yemyin” then there would have been a great deal of problems in the media.

IMD acknowledges 03B as Yemyin in August!

After two months of neglecting 03B, the IMD upgraded the deep depression to cyclone Yemyin, the next name on the list. This was finalized when Super Cyclone “Sidr” was named in the Bay of Bengal. Though the IMD only upgraded it to a weak tropical storm status with winds up to only 40 mph. This is a clear example that India will do what ever to tease Pakistan not just in the world of politics but also India has started to do this in the world of nature. It is not wrong if we say that cyclone Yemyin was the most political storm in this region after cyclone Bhola in 1970.

Pakistan Weather Portal (PWP) did contacted an Indian meteorologist in 2010 regarding cyclone Yemyin, Mr.Tatiraju had this to say;

“I think that there was a mistake in identifying the storm’s intensity. RSMC New Delhi only names systems that have attained cyclone intensity.

And also that the India-Pakistan issue is very sensitive issue. Until given a proper reason, neither of the govts. should be blamed.”

Why should Pakistan be blamed for this error?, We gave a timely warning for our citizens. However this is true that there is a difference in IMD’s tropical scale and SSHS. But it was clear that depression 03B had gained tropical strength and had reached a severe cyclonic strength on the IMD scale while a weak category-1 hurricane level on SSHS.

Cyclone Yemyin was at least a strong tropical storm or a weak category-1 hurricane. Just 12 hours before landfall, the cyclone was going trough intensification period and it started rotating like a normal strong tropical storm does. The cyclone developed spiral and outer bands, indicating intensification. For a brief period Yemyin had an eye visible through different types of satellite image with a well-defined center after landfall. The eye was cloud-filled but it was surrounded by large rotating thunderstorms. These are some of the features that clearly shows that Cyclone Yemyin was a weak category-1 hurricane not a depression as described by the IMD. There was enough evidence that the tropical storm reached hurricane strength

Weather Warfare between India and Pakistan

This is not the first time India has done this to Pakistan as a matter of fact in 1970, India did not pass information about  Cyclone Bhola that formed in the Bay of Bengal and the storm was heading towards East Pakistan. India remained silent and in a clever move it quietly ordered its sailors to return back to land before this monster storm approaches them, India did every thing it could so that this information is not leaked to Pakistan.

In 2005, a deep depression 05B formed in the Bay of Bengal on October 26, it was a weak tropical storm on SSHS scale. Pakistan upgraded the storm to a cyclonic storm status on the IMD scale but the IMD rejected that and eventually named another cyclone as “Baaz” on November 28. It seems as if India does not like any neighbouring country to cooperate with them in any field but as India wishes to become a super power it must cooperate with its neighbours. 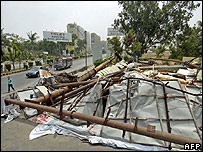 Billboards collapses in Karachi during the storm

At least 250,000 people affected, while 730 dead with 200 alone in Karachi due to cyclone Yemyin. Who should be held accountable for these deaths? When will human beings realize that a common man does not care about the world of politics, they just want food for their families and nothing else. But it appears as if India wants politics in every part of life, their cyclone warning website was offline and they were forecasting false information when Pakistani were suffering nature’s wrath. India did this in 1970 and repeated this inhuman act in 2007, though relations were tough in 1970 but they were good in 2007. So what happened then?

India must realize that there is an enormous gap between politics and humanity, If India does not realize this and continues to do, then its dreams of becoming a super power will dissipate just like a hurricane dissipates over a land!