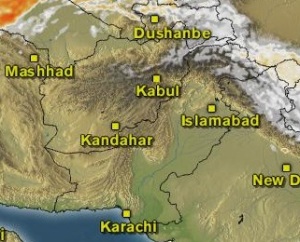 It is October now and things are likely to be “Octoberish” in Pakistan meaning?  Well, things will be just like any October in Pakistan. The country has experienced decrease in the percentage of humidity while increase in temperatures at some isolated places. However during the next 2 to 3 days rainy activity is expected in some upper parts of Pakistan, while normal conditions expected in lower parts of the country.

Rain in which part?

A fresh western disturbance 01 is likely to enter Pakistan’s northern areas from Afghanistan on October 5 that is likely to grip Gilgit region, few parts of Khyber, northern Punjab and Kashmir till October 8. More dengue problem?

Temperatures are expected to fall in these above mentioned areas due to the mid-latitudes wave. Fast to strong winds are also expected to blow in these areas. In Islamabad, rainfall with thunder along fast winds expected from October 5 that will continue will 2 to 3 days. Winds across the expected path of the wave are likely to be around 56 km/h (35 mph).

Which part will be dry?

Sindh, south Punjab and some parts of Balochistan are likely to remain under the presence of high pressure till few days. Day temperatures could reach around 36°C –  38°C in some upper parts of Sindh till next 3 to 4 days while 33°C – 35°C in central and south-east Sindh. Night temperatures are mostly normal in many places of Sindh.

The normal south west winds or sea breeze has returned to Karachi after nearly 2 months of being slightly inactive. Karachi is expected to see normal temperatures that is 32°C – 34°C, along with fast winds. Overall the weather will be partly cloudy with chance of drizzle.

From October 10 till October 11, there might be some chances of rainfall with fast winds in some parts of Balochistan including the provincial capital Quetta, after that the western disturbance 02 that came from Iran to Balochistan on October 10 early morning, will start to move towards India and will affect India from October 11 late/12.

If we look at the southern parts of Pakistan then things are expected to start to heat a little bit. In Karachi, temperatures could go around 36 °C, while things will be more hotter in central and upper parts of Sindh. Hyderabad may see around 37° C temperature. This heating trend is normal for the month of October and this trend might start from October 12 and last till 2 to 3 days.

However no major change is expected in any other part of the country during the current week even though the high pressure has moved away now.