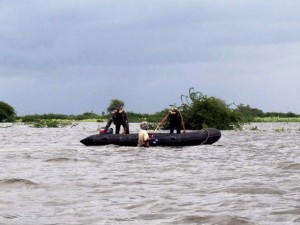 Pakistan is a country that has faced a never-ending threats both internally as well as externally. Whether its economically or financially, terrorism or political crisis, sectarian violence or civil unrest; these are all the problems that Pakistan has faced during its 64 years of life. But each time Pakistanis have bravely fought against all odds and have shown the world that they are indeed a strong nation than any other country of the world. Despite these problems, there is also another problem that Pakistan faces every year. What is it? It’s the monsoon season, that kills more than 150 people every year. The double threat that Pakistan faces today is due to the recent extremely heavy rainfall in Sindh during the late monsoon and the heavy rainfall in Punjab that occurred during the early monsoon that give birth to the dengue outbreak in the province.

Sindh is usually termed as breadbasket of the country, any major disaster in this part of Pakistan is usually considered a threat to the already fragile economy of Pakistan. Last year, the Sindh province was severely affected by the tsunami-like floods that originated from northern Pakistan and created havoc in the southern Pakistan. Unlike last year in which record-breaking monsoon rainfall in Khyber and Punjab province caused a large flood to move from northern Pakistan to Sindh, this year record-breaking monsoon rains have occurred in Sindh province. Following is the amount of rainfall recorded in Sindh this monsoon season from second week of August till second-week of September;

It must be kept in mind that Sindh was facing drought like conditions in July. The drought conditions were emerging since the winter of 2010 in Sindh and it was feared that the drought may intensify if no weather system approaches the province in August. Approximately 50 million lives have been uprooted besides causing huge devastation to livestock and standing crops. Hundreds of people have lost their lives; over four million acres of land is under water; 2.5 million acres of crops have been destroyed; and over a million houses have been damaged or washed away. At least 270+ people gave lost their lives in the recent flooding and rainfall in Sindh, the situation can get worse as there is a great fear of spread of diseases among the affected people. The disaster is being termed as worse than the 2003, 2006 and 2007 floods in the province. It is the worst natural disaster after 2010 floods in Pakistan.

The Pakistan government once again appealed to the whole world for loans and aids to help the rain-hit people. Responding to Pakistan’s appeal for international assistance China announced that it would supply relief goods worth $4.7 million for Pakistan’s flood victims. United Nations (U.N) had also launched aid appeal to for funds generation in order to provide a consolidated humanitarian response to Sindh’s flood ravaged parts. However this time the international organizations might not be happy with Pakistan for its poor arrangement for the monsoon season after repeated warning to the Pakistani leaders that fresh flooding may occur in parts of the country.
Monsoon has once again proved to be disastrous for Pakistan but nobody can stop this, It will come again in 2012 and again in 2013…!