This is an international special tropical coverage from Pakistan Weather Portal (PWP) for Indian readers;

December tropical activity in the Bay of Bengal 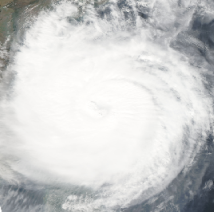 Category-1 cyclone 'Thane' with an eye in the centre

Since 2005, there had been December storms in the Bay with the exception of 2006 and 2007. Following is the list of those storms;

Following is the overview of cyclone Thane;

LAST UPDATE: Cyclone Thane, a category-1 hurricane has made landfall between Cuddalore and Puducherry this morning and due to land interaction it has started weakening rapidly. Strong windstorms lashed southern Indian coast about (140 km/h) winds lashed over Puducherry and Cuddalore with heavy intensity precipitation. So far rain has continued in Chennai with showers continuing since yesterday morning with fast to strong winds (65 km/h), a total of 92 mm rainfall occurred in the city. Following are the main features of the storm as of now;

Thane is now weakening as heat supply as been cut off from the Bay the storm will continue to bring heavy rain as it moves further inward. The remnants of Thane might either start to move into the Arabian sea after December 30 or move towards central India and dissipate there. Thane has now become an unimportant storm as it is now on the route of weakening.

Cyclone Thane is 160 km ESE of Chennai about 20 mm rainfall with strongest winds of 56 km/h occurred in the city. Its raining in the city with strong winds (50 km/h) as of now. Heavy rainfall along with strong windstorms (100 km/h or greater) could occur in northern Tamil Nadu and adjoining Andhra Pradesh till tomorrow. Following are the main features of the storm as of now;

Thane has started weakening due to interaction with rough land surface.

Tropcial cyclone Thane is 250 km ESE of Chennai, light rainfall that started from yesterday night has continued till now with fast winds (37 km/h), the rain intensity is very likely to gain strength during the evening and winds could reach (50 – 70 km/h). Due to rough land surface, decrease in sea temperatures and increase in vertical wind shear, Thane would weaken from tonight. Following are the main features of the storm as of now;

Thane has also formed an unorganized eye in the centre that can be viewed from Infra-red images. Thane is expected to make landfall on December 30.

Category-1 cyclone Thane has intensified further in the last 6 hours as pressure has dropped to 980 mbar. The sea temperatures are (27°C – 29°C), the cyclone is currently over the area of weak vertical wind shear therefore it might intensify further before weakening. Before landfall Thane would weaken. Following are the main features of the storm as of now;

Severe rainfall (above 150 mm) expected with strong windstorms from December 29 with increase in intensity later the day. Thane is 450 km ESE of Chennai, light drizzle occurred today in the city due to the spiral bands of the storm. Landfall is expected on December 30.

Cyclone Thane has intensified into a category-1 hurricane. Following are the main features of the storm as of now;

Forecast remains same, landfall expected on December 30, severe weather expected in northern Tamil Nadu and southern Andhra Pradesh by December 29 mid-day/evening. However Thane would weaken by the city it reaches for landfall due to increase in vertical wind shear and land interaction.

Cyclone Thane has intensified further as pressure  has dropped to 992 mbar, the cyclone is moving extremely slow. The area over which the cyclone is rotating has weak wind shear as well as high temperatures (26°C – 27°C), quite favourable. Thane is expected to intensify into a category-1 hurricane as it aims towards northern Tamil Nadu and adjoining Andhra Pradesh.  Due to slow movement, its time of  landfall has been delayed however the storm would weaken by the time it reaches the land. The outerbands of the cyclone are touching the southern coast of India while the trough is extending into Burma. Latest images indicates that the around the centre, about 500 mm rainfall is present in the thunderstorms of Thane.

Following are the main features of the storm as of now;

Since the cyclone has been almost stationary, severe weather could start in southern India by tomorrow night. The cyclone is now 650 km ESE of Chennai, few low lying clouds are entering the city with little to no breeze at the moment.

“Cyclone Thane has formed in the Bay of Bengal”

As expected, deep depression BOB 05 has overnight intensified into a cyclone named ‘Thane’, the cyclone may intensify further and could attain a category-1 hurricane status by night/tomorrow as wind shear is likely to become weak and sea temperatures are 26°C – 27°C, quite favourable. Following are the main features of the storm as of now;

Thane has obtained a hurricane-like shape with spiral bands extending into southern India an Srilanka, a trough over Burma prevails. Heavy rain showers along with gale winds (50 mph/greater) are expected in northern Tamil Nadu and adjoining area as cyclone moves closer. Thane is 750 km ESE of Chennai.

Deep depression BOB 05 has been gaining momentum all day long, it is expected to intensify into a cyclone in next 12 to 24 hours. The trough can been seen stretching towards Burma, giving an overcast conditions over the country. The wind shear in the Bay of Bengal is currently moderate (20 knots). The sea temperatures are also favourable for further intensification. Following are the main features of the storm;

Heavy rain showers are expected from tomorrow in southern India with strong winds (35 mph),which will gradually increase as the cyclone moves closer. Winds (50 mph or greater) would blow in coming days with chance of severe rainfall. The expected cyclone is expected to make landfall over northern Tamil Nadu on December 28. At the moment, the storm is 800 km ESE of Chennai.

This morning’s depression has intensified into a deep depression BOB 05 at 998 mbar, it is expected to intensify further into a cyclone. Moisture from BOB 05 has reached Burma while the spiral bands have touched the coast of India as well as Srilanka. Tamil Nadu and adjoining coast of India is under threat from this storm. Following are the main features of this storm as of now;

3 thoughts on “Cyclone Thane has formed in the Bay of Bengal – Special coverage!”