After 2005, the sun is burning like hell and things could not get any hotter than that, the largest solar storm after seven years is expected to send a shower of radioactive solar particles racing towards Earth at almost 1,400 miles a second this week. This massive and huge eruption could affect the GPS systems and other communications as it is reaching the Earth’s magnetic field on January 24.

Sun was sleeping before the storm!

During the past several years the sun had been sleeping with no sense of what is happening around, the sun was too quite that was the part of its 11-year cycle. The Sun went into an unusual quiet cycle with no activity that might only happen once a century.

The solar flare will hit Earth on January 24 and could last till January 25. The biggest issue is radiation because radiations could affect satellite, communication and astronauts in space.

Plasma is famous for causing much of the problem during solar storms. In 1989, a solar storm caused a massive blackout in Quebec, Canada. This time the northern part of Earth could suffer because of the coronal mass ejection. The Coronal Mass Ejection is hitting Earth at about 1,400 miles per second, causing a geomagnetic storm. But what is a solar storm?

What is a solar storm and its effect on planet Earth? 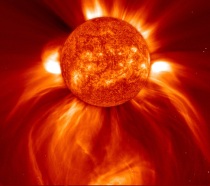 A solar storm is an event in which activity on the Sun interferes with the Earth’s magnetic field. Because the Sun is so far away, many people believe that solar storms are not capable of causing damage, but they can in fact be quite devastating. Research in the early 2000s created a number of potential worst case scenarios which illustrated the destructive power of solar storms, including scenarios showing that powerful nations in the developed world could be brought to their knees for a decade or more by a storm of large magnitude.

Solar storms occur as a result of events such as solar flares and coronal mass ejections. These events generate a so-called “solar wind,” a gust of charged particles which can slam into the Earth’s magnetic field in hours if the solar wind happens to be traveling in the direction of Earth. The collision can generate quite a light show as a geomagnetic storm erupts, and the storm can last for several days.

The most severe solar storm in recorded history occurred in 1859. It was known as the Carrington Event, this solar storm caused electromagnetic disruptions all over the world, Lesser storms were also recorded in 1958, 1989, and 2000, and these events were associated with interruptions of the electrical grid and damage to satellites.

As few parts of Earth get ready for the ‘geomagnetic storm’ the other seems to be lucky as due to this activity the northern lights have lit up the skies above Scotland, northern England and adjoining parts of Ireland. The Northern Lights sometimes can be seen from northern parts of Scotland but this solar storm has caused the lights to be visible from northeast England and Ireland, which is a rare event indeed!

One thought on “Solar storm: Sun, Earth and the Northern Lights!”