RECENT CYCLONES in Arabian Sea DURING THE MONTH OF JUNE:

Arabian Sea, about 20 years ago was known to be a ‘Silent’ or ‘Quiet’ sea and formation of storms/cyclone in this part of water was very rare. However in most of recent past it has been very active with producing some strong Tropical Systems and Monsoon Lows that caused large scale damages in many countries neighboring the Arabian Sea including Pakistan, Oman and India. 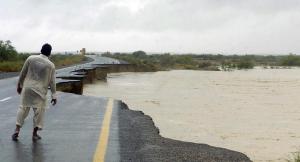 Following are some of the major Tropical Storms that formed in the month of JUNE during last 20 years. 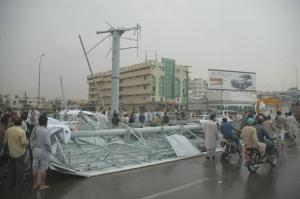 A Huge Billboard thrown away by 23June storm in Karachi

1996; 17-19th June: A low category storm hit Indian Gujarat on 18th June, it caused light to moderate rain in lower Sindh especially in Thar. Karachi had hot and windy days (from NE) with only few clouds on 18th & 19th June.

1998; 8-9th June: A strong Cyclone 2-A hit western coast of Gujarat on early 9th June, causing lots of damage to life and property there. Scattered places of lower Sindh received rain/thunder showers on 9th June. Heavy showers received in many parts of Karachi on that afternoon and rain in most of city in the evening (at Maghrib), about 27 mm rain was recorded at Nazimabad area. 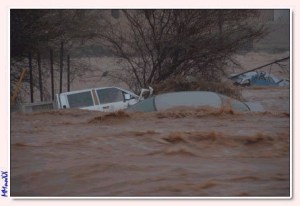 2007 (1); 2nd-7th June: Super Cyclone “Gonu”, may be the strongest storm formed in the Arabian Sea, reached its peak intensity of 240 km/h winds on 3rd June. It hit north east Oman on 6th June, the worst affected country by this cyclone, it also affected south east Iran coast, parts of UAE and brought some showers to extreme south west Pakistan i.e. Makran coast. Parts of Karachi and Thatta received only light shower or drizzle on 5th June.

2007 (2); 21st-26th June: A Depression formed (around 20th June) in the Bay of Bengal crossed the Deccan Plateau and entered Arabian Sea on early 24th June, regained its intensity, became a tropical cyclone “Yemyin” and hit the Makran coast on 26th June near Ormara & Pasni. It badly affected almost the whole of Pakistan coastal belt and its nearby areas, from Badin & Thatta to Turbat & Panjgur and caused great amount of damage.

In Karachi, right from the beginning, the area of that Depression was so large as the city started to get its effects even from 21st June, even on that day i.e. 21st June, the city was very hot (39°C) and a dust storm followed by a thunder shower occurred in the evening. Then on Saturday, 23rd June, on an extremely hot day (44°C), the city experienced the most devastating dust/wind & thunder storm of its history (during 4:45 to 5:30 pm) that caused widespread damage and cost over 200 lives.

From the next day, Sunday 24th, Karachi weather was mostly windy (ENE) and city received intermittent rains (from Sunday) till Wednesday 27th June, especially some heavy showers with strong ESE winds received on Monday 25th evening-night when the storm was passing nearby towards Makran. During that week of June different areas of city received 90 to 130 mm of rain. 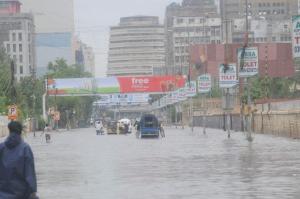 I I Chundrigar Road after 6-June Heavy Rain

2010: 1st– 6th June: The most recent cyclone “Phet” was a low pressure area in central Arabian sea that turned into a cyclone on 1st June, Earlier its 2 to 3 ‘Forecast tracks’ were turned out wrong and it kept intensifying & moving NW towards Oman. It made its first landfall at Oman on Friday 4th June and weakened, at the same time (early Friday) it started producing very heavy rains in Gawadar & Jiwani, at Makran coats that continued till late Saturday 5th June (Gawadar received 325 mm record rainfall in 24 hours) then it curved and moved E in Arabian sea and made its second landfall as a depression near Thatta on Sunday 6th June evening. From that evening to late night most of lower & some of central Sindh including Hyderabad received heavy rains.

Karachi received heavy rainfall from Saturday 5th June late night (heaviest during 1 to 3 am) to Sunday 6th June evening as different areas of the city received different amount of rain from 85 mm (University Road) to 150 mm (Masroor Base) and also 6th June was the ‘coolest day of June’ in Karachi for over 20 years as maximum temperature on that day was only 28°C.