Another record in the making?

Severe Atlantic storm having the qualities of a category-1 hurricane is pondering over the United Kingdom with winds reaching as high as 80 miles per hour while 40 feet high tides which could easily wreak havoc in the Kingdom. The tropical storm-like system is expected to move slowly towards the north-east, touching North Wales and Northumberland. The Britain Agency has issued 23 flood alerts across the South West parts of UK. The warning is in effect for the low-lying coastal areas in Essex, Hampshire, South Wales and the Thames in West London.

Forecasters are amazed to see such a deep low pressure during this time of the year, although such storms do form but never this early. It is feared that June could go down as one of the wettest on record. It is worth mentioning that Britain has been experiencing some rare weather almost every month since January.

Is European Monsoon setting in? 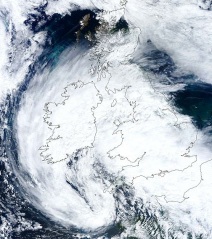 In reality European Monsoon is not an actual monsoon as it does not meet the qualities for being classified as a monsoon. Another term that is used which is most often used is “The return of Westerlies”. Such weather patterns are quite common in western Europe during the winter season but with the onset of spring the number of westerlies decreases. Once the summer starts they return but these winds from the Atlantic are loaded with heavy rain and winds. Notable countries of Europe affected by these ‘special’ westerlies include Ireland, Britain, West Germany and northern France.

This weather pattern causes an intense disturbed and unsettled weather which is slightly identical to the great Indian monsoon. The storm brings thunderous rain with strong winds and thunder, occasionally they are accompanied with hailstorms.

Following is a video shared on PWP Youtube by PWP Follower Adil Hussain from Birmingham, UK on June 15;