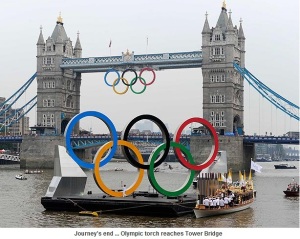 The world is getting ready for the biggest event in the world as London hosts the Olympics for the 4th time, weather remains the source of concern for many as it could create problems for the opening ceremony and the games itself. Many parts of United Kingdom are some light to heavy showers as two weather systems are near the country.

London to stay dry some hours!

The system moves away for good

The band of heavy showers are not likely in London as Olympics ceremony kicks off. Temperatures are also expected to remain warm, temperatures during the day peaked at 26°C.

A mid-latitude has been passing through the southern parts that brought some showers to the city earlier in the day but as it moves eastwards the chances of another band of showers seems unlikely. During the mid-day, a thunderstorm south of London that had the potential to bring isolated heavy rainfall though it remained over the sea and dissipated. Tonight the city would remain dry with passing clouds and slight chances of isolated showers.

Olympics games not so lucky

The wet weather would return to the southern parts as rainfall is likely in London and surrounding areas from the coming week.