”Will drought take over the country’

It should not be called a ‘monsoon season’ as the precipitation has been 50% below normal all over Pakistan. PWP in its monsoon article (2012) that was published in April had predicted that rainfall all over the country would be below normal and there would be no repetition of 2010 or 2011’s flood. Pakistan Weather Portal has blamed the expected development of El-Nino for the upcoming monsoon. The difference between La-Nina and El-Nino is that El-Nino which is a flow of hot air, increases the temperature of Pacific ocean, this has a significant impact on the weather around the globe.

However this is not something that is unusual, there are years in which the monsoon activity over the sub-continent had been sluggish. During the 21st century, Pakistan experienced drought-like monsoon in 2000, 2001, 2002, 2004, 2005 and 2009. In these years, majority of the country experienced dry conditions. During the El-Nino years, the frequency of westerlies (non-monsoonal wind) increases that are main source of rainfall especially over the northern areas. El-Nino is a spanish word which means boy, it may also refer to a Christ child, because of the periodic warming in the Pacific near South America that happens around Christmas.

After almost a two-year absence, the anti-monsoon phenomenon is ready to came a come back. Since the last month, sea surface temperatures in the eastern Pacific ocean have started rising gradually, a clear sign that the world is moving towards El Nino.  A clear example could be seen in the cyclonic activity over the Eastern Pacific ocean that have seen major hurricanes brewing over the warm waters.

The provided map shows that the greatest warming has occurred near the west coasts of Central and South America where sea surface temperature (SST) has risen to by 2.0°C which is above the normal average of this part of the world in July which is a clear indication that El-Nino is happening.

We are moving towards El-Nino

There is a ‘very’ strong probability that weak El-Nino would develop by early August as the ENSO conditions would change rapidly. It could then mature in the month of September thus leading to a moderate version of El-Nino in September or October. Full-fledged El-Nino episode means that the Indian Monsoon would probably be affected in 2012, it already has been affected. Even till now scientists have failed to establish a direct relationship between the Indian Monsoon or ENSO. For instance, El-Nino of 1997 brought heavy monsoon to India however but country was not so lucky in other El-Nino years. However there is no chance of a sudden return of La-Nino till 2012 as it was being predicted by some foregin models who later changed their forecast in May.

According to the National Oceanic and Atmospheric Administration (NOAA), they also agree that ‘strong’ possibility of El-Nino making a return this fall. It is worth mentioning that in February, NOAA believed that La-Nina would remain active till the end of this year, though they changed it in May. Following are the likelihood of El-Nino in the following months by NOAA;

Another blow to the monsoon? 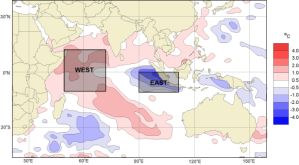 Tokyo-based Regional Institute for Global Change (RIGC) has dropped another bomb on the monsoon, they along with Australian Meteorology Bureau have predicted the formation of a negative Indian Ocean Dipole (-IOD) during the month of August and September.

Our View on the monsoon remains same

Pakistan Weather Portal (PWP) still maintains its monsoon forecast which was issued on April 4, 2012 (Monsoon II), which states that;

“Monsoon 2012 would be near normal to below normal as a whole over the sub-continent but isolated places might experience some above normal rainfall that includes West Bengal, Jharkhand, Assam, Utter Pradesh, Madya Pradesh and parts of Bangladesh . It is likely that monsoon rainfalls may develop rapidly during the onset of the season but as summer progresses further a decrease in the overall coverage of rainfall could occur. August and September, are the two months in which decrease in the rainfall activity is expected. Monsoon might start normally at first later giving way to El-Nino conditions. The north-western parts of India, northern Pakistan and Sri Lanka might also experience below normal rainfall but changing atmospheric condition would cause an increase in the activity of westerlies over these areas. Southern parts of Pakistan, Indian state of Gujarat and other surrounding areas are also expected to experience less than normal downpours. However an event of isolated flash flooding/urban flooding (happens every year) can never be ruled out.”

We forecasted – it happened!

As forecasted by PWP on April 4 (almost three months ago);

Although El-Nino is coming back but it is not going to last much longer as it did in 2010. According to models, neutral ENSO conditions would return by the spring of 2013. So the monsoon of that year could be around neutral!