Going to make a short article to make a straight and a quick point! Where is our media now? I mean seriously western coastal Balochistan has been affected by heavy flooding past week yet we have not seen a report on media’s precious headlines.

Much of coastal areas of Pakistan since Decemeber last year are under a grip of unusual monthly heavy rainfall. Heavy torrential rainfall had lashed Makran coast since past few days including Gwadar causing the death of five people, heavy flooding has occurred in Gwadar and Kech district where shops have been submerged under storm water while several walls have collapsed.

Why do we forget to help the needy? 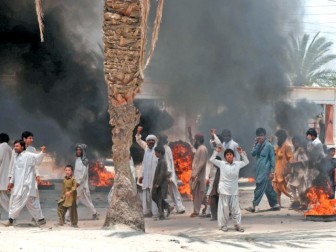 Just few weeks back, an earthquake of magnitude 7.8 on the Richter scale hit north-western Balochistan, it was reported that more than thousand homes were destroyed while 41 people died yet there was little help from the government and as usual the media did not highlight as it was expected from it. This has led to people in the small town of Mashkhel to protest by burning tires and raising slogans against the government’s non-serious attitude.

This is not the first time this has happened in fact every year a calamity, small or big hits Balochistan but we never come to know the exact damage. It has brought to my knowledge that Gwadar city still needs help with it’s infrastructure after it was badly affected in 2010 by cyclone ‘Phet’. Following are PWP’s article that were published in 2011 and 2012;

It has been said that 20 years old year record of hailstorm has been broken in north-western areas of Balochistan, the storm caused the death of 5 people.

This is a weather blog but at the same time it is my sole responsibility to highlight the mayhem brought by nature  and during the two years experience I can say it confidently that weather disaster and related events of Balochistan are not much highlighted. The Media should show the misery of people in Gwadar and Kech district.