Ameonna went to other spirits to know what had happened

During the 10th century, there was a small fishing town in Oushuu (present Sendai 仙台市), Japan (日本国). It was a very beautiful and calm village filled with happiness and serenity. The special thing about village was that once every year a peaceful spirit known as Ameonna (雨女) used to bless the village, she liked, with rain and with it fish used to fall from the sky. People did not need to fish and the crops were in abundance, delicious and healthy because of her. In return the people started to idolize and worship her and made statues of her as a tributes.

These blessings continued for years and years but one day when she came to the village she saw emptiness and destruction and unkempt houses and crops; and later realized that part of her beloved village had drowned under sea water. Heart broken and tearfull, she went to every spirit and demon to inquire about the tragedy bestowed on her people.

God of the tsunami (津波)

Namazu is the most devilsh spirit alive

Ameonna came to know from a wise spirit known as Kashima (鹿嶋市) that a powerful and hideous demon known as Namazu (鯰), a giant and mad cat fish has done this. He further told her;

Ameonna asked him that why has Kashima given free hand to Namazu, to which Kashima replies;

“Namazu was a normal fish but one day his parents were caught by the fishermen near Oushuu, he (Namazu) knew what they had done to his parents therefore he decided to take revenge from the people of Japan. He signed a deal with the devil, to give him (Namazu) unimaginable powers so he could bring death and destruction to Japanese people and I came to know about his intentions and with my (Kashima) powers I controlled him and therefore he could not bring tsunami and earthquakes but since then he is growing stronger and stronger and I cannot control him anymore and he is now bringing earthquakes to every part of the world.”

Ameonna interrupts him and vows to stop Namazu but Kashima warns that he is too powerful and cannot be controlled. The spirit ensures she will restore her people’s honour. Kashima decided to go with her to hunt the devilish fish.

The battle between Kashima and Namazu was bloody

They searched for him for days and nights, but they did not find him…… one day they saw him near the Shikoku island. Kashima jumped from the sky to control the giant fish but Namazu was too strong and powerful. Namazu looked at Ameonna and laughed at her, “What will you do?, he said, “Rain on me…Haha!”. But he was right what could Ameonna do, besides raining. She backed out slowly, crying as she thought of her people. But Kashima was also stronger and after hearing about what Namazu has done to Ameonna’s people, he was ready to sacrifice his life. The spirit watched as fighting commenced and Kashima finally took over the giant fish. Kashima was badly injured during the fight so Ameonna healed him and thanked him. She told him that her people’s fate has been avenged, with this, Kashima while controlling Namazu went on his path.

Thousand years have passed since Ameonna met Kashima. She has heard that a powerful tsunami and earthquake has battered Japanese coast while listening this heart-breaking news, she is left bewildered once again. 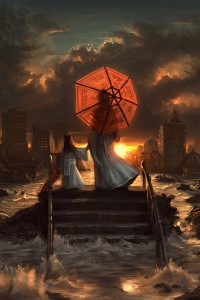 After the tsunami hit Japan, Ameonna holding a survivor

8 thoughts on “The Revenge that shook Japan!!”