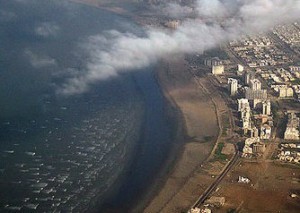 Karachi from the eye of a bird!

Pakistan has been under the grip of a severe cold wave that has shown its strength in Balochistan and Sindh but it is the Sindh province that has been shivering under the chilly winds coming from north Asian states but it is true that February 7 was the coldest day of the month in the metropolis after 30 years, the new record was set yesterday that was of 21.8°C (maximum temperature). During the whole day the temperature found it hard to rise beyond 21.8°C as fast winds along with low humidity made Karachiites feel as if they were spending a day in Balochistan or Punjab. The lowest temperature that was observed during the night of February 7 was only 6°C, making Tuesday a very chilly day in Karachi.

Sindh, one of the hottest places in the world, too experienced the chilly Russian winds as people were amazed to see the strength of the recent cold wave in the province. Following were the minimum temperature that were recorded in Sindh on February 7 night;

What caused the record to breaking in Karachi? 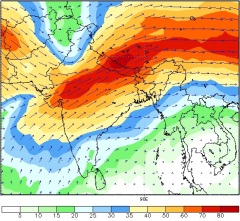 Winds at 200 mb over South Asia

The change in the pattern of wind is blamed for such activity in Karachi as on February 7 the dry winds continued to blow from North-westerly direction. The winds coming from central Asia were started blowing in the city from February 5 morning and before advancing towards eastern areas of the country. Normally the winds reach the speed of 21 km/h in the city during winter season but yesterday’s winds were different, the winds started to pick up speed at about 3:00 pm PKT and gained full peak at about 6:00 pm PKT till 7:30 pm PKT, the winds were blowing at 36 km/h to 40 km/h.

Apart from all the winds, humidity was also very low, at early morning it was 50% but as the day progressed further the humidity dropped to just 3.5 %. All these factors led to a drop in temperature both maximum and minimum.

The record that was beaten!

Pakistan Weather Portal (PWP) on February 4 had warned that Europe-like cold wave would reach the country. The current cold wave is likely to remain on peak till the night of February 8 during this period the minimum temperature would range between 7 °C – 5°C, this cold wave will remain active till February 10 night and after that the minimum temperature would start to rise gradually. Drink a lot of water and wear warm clothes to stay healthy during the winter season as this cold wave is likely to stay for some time!