“It is the month of flowers as spring looms in” 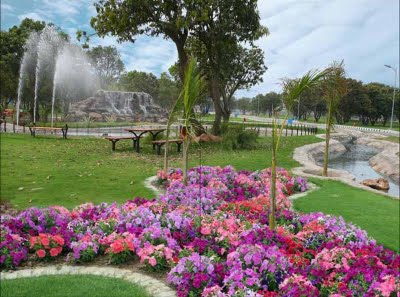 Lahore - Breathtaking view of the city

Spring season has started now and its time to say a big bye to winter season. Southern parts have started to heat up but the northern areas are still under a grip of some cold winds which is likely to subside in coming weeks.

For tourist – Spring conditions in the country

If any tourists is planning to visit Pakistan in the month of March then this season is quite pleasant with no expectation of any sort of severe weather excluding few years. Rainfall is rare in Sindh, south Punjab and central & coastal parts of Balochistan in this month while western systems continue to affect the northern Punjab, most of Khyber, few upper parts of Balochistan and Gilgit region. But these western disturbances gain intensity over those areas due to the hot air present over the land surface due to this interaction strong dust storm (100 km/h) could occur in these areas, March. This phenomenon however is usually observed after March. Following are the highest and lowest temperatures recorded in the month of March;

To happen now in coming days

Flowers are everywhere in Karachi these days as spring season kicks in the city. Weather is likely to be very pleasant in the metropolis during the next few days with passing of few low lying clouds. In Karachi, daytime temperatures will remain from 28 ° C – 32 ° C with some fast winds (30 km/h – 46 km/h) during the night, lowest temperature could drop to 15 ° C- 16 ° C especially on March 6/March 7.

Where it is going to rain?

Fresh western disturbance ’23’ will affect northern areas of Pakistan including Islamabad and Peshawar on March 3 night/March 4 morning till March 5 night, during this period drizzle/isolated shower may occur in Lahore as well. The level of precipitation as whole is light to few moderate falls as WD 23 would start to affect Indian Kashmir on March 4. On March 4, dense cloud cover and rainfall would occur over Gilgit and adjoining Khyber and Kashmir inclduing Islamabad, from March 4 late night/March 5, this cloud cover would engulf Indian Kashmir as rainfall would move eastwards. On March 6, it is likely that western disturbance ’23’ would move far eastwards thus northern Pakistan would be clear with few passing clouds.

Where it is going to be dry?

As usual, Sindh and adjoining parts of Balochistan would remain dry. However an anti-cyclone would form over northern Arabian sea on March 3 that would cause daytime temperatures to rise in Sindh including Karachi.

Anti-cyclone would would dissipate on March 6 as it will move into western coast of India that is the Gujarat coast. Even though it is dry in these provinces, spring would bring some colours to the province!