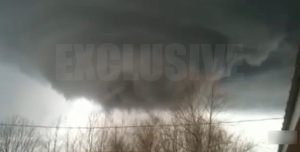 The Tornado was filmed live by many

Alabama state of the United States which is located in the south-eastern region has once again hit by a series of tornadoes (today), the small of town of Harvest is now again in ruins however there has been no deaths so far (Above is the actual picture of the tornado). Apart from this severe weather in south-eastern region, in the Mid-western part of United States some 50 people have died to due severe thunderstorms.

The Alabama state including this Harvest town was hit by a series of tornado last year when more than 200 people were killed while outbreak of 140 tornadoes were reported. Residents are saying that it is all happening again but it is worst than last year.

Residents complain that they did not have enough time to re-build from the last year’s destruction and now they are once again at the mercy of the U.S government. In 2011, President Barak Obama declared Alabama as a disaster-hit region when 162 people died in the Alabama state.

One thought on “Alabama tornadoes – Two years in a row!”