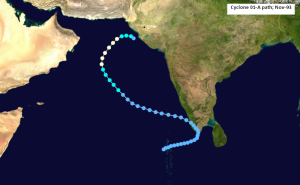 On 10th November, 1993 a low pressure area formed just off the coast of south India and northern Sri Lanka. It kept moving NW into central Arabian Sea, intensified in next 2 days and became a cyclone on 12th November. It moved further north (as clouds start to come in Karachi from SW on 13th November) then moved north-east a bit towards Pakistan esp Sindh coast on 14th November, when it was whole cloudy day with drizzle at times in the city. (Remember on that time there was no ‘internet’, no easily available world media and no satellite picture of Arabian Sea was available. Then we had to depend a lot on regular news or updates on Radio, state TV (PTV) and only satellite picture we were able to see once in a day was on PTV’s weather report at night).

On 14th November’s night weather report told that the storm is keep moving towards Sindh coast and was about 300 km SW of Karachi. As it was first tropical activity near Pakistan of modern time (at that time) and also first since May 1985 (when a cyclone came close to Pakistan coast) therefore there were some fears and a bit ‘panic’ in the city. Also I remember, that evening of 14th November, it was absolute silence (with hubs) in the atmosphere as it was heavily overcast (clouds were moving very slowly apparently from SE or E) with no breeze at all till night, that scene also created a bit fishy feeling.

On the morning of 15th November light rain was falling but winds picked up at about 10 am, very strong NE or E winds (I guess of about 60-80 kmh speed) continued almost whole day esp from 11 am to 4 pm with light to moderate rain at times that kept that day very cool and max temperature was just 23°C. Meanwhile we heard the news in the afternoon that the storm turned towards Thatta-Gujrat (Kuch) coast and now no threat to Karachi. By the evening (just before Maghrib) things started to become settled and there was a rainbow at east also in the east for a while then clouds decreased by the night and the next day (16th November) was a pleasant partly cloudy to mostly sunny day in Karachi. No accurate rainfall reading of Karachi was found from news or newspapers but it was about 10 mm recorded in Nazimabad and definitely more in south-eastern areas of the city.

Many places of district Thatta were badly affected by the storm especially Keti Bandar was reported to be under water where number of people were died or gone missing.