Oklahoma has witnessed a mammoth tornado that was 3 kilometer wide packing winds of up to 320 kph, it has killed 91 people while 300 are injured. There is a forecast of more tornadoes in the affected areas though this tornado was not the strongest of all when compared to past tornado in U.S but its size is what has caused severe widespread destruction. 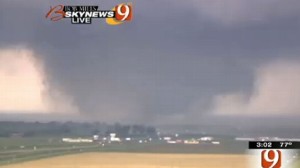 On the Enhanced Fujita Scale, it was a EF4 tornado, second most powerful category of tornado with winds up to 320 kph. On a regular Fujita Scale it was a F3 tornado.

This is a developing story!

6 thoughts on “Massive Tornado blasts its way through Oklahoma!”