‘Indian Ocean is giving threats to the Monsoon!’

IOD is an irregular phenomenon in which the western equatorial of the Indian Ocean becomes warmer while the eastern equatorial cooler or vice-versa.It affects the Sub continent, Australia, Indonesia and many other surrounding countries. There are two phases of Indian Ocean Dipole; 1. Positive IOD 2. Negative IOD 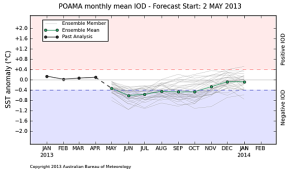 According to the American and Australian experts, a negative Indian ocean Dipole is very likely this year that will remain towards the end of Monsoon season. According to their models which show that a sharp transition would take place during last week of May as shown in the above chart which will result in the formation of a negative Indian ocean Dipole hence the onset of monsoon would be delayed in western India and all over Pakistan, these areas will continue to witness below normal rains till the end of monsoon.

The Australian Meteorology also points towards cooler temperature in the Pacific Ocean that might led to a weak La-Nina later in the year. Four out of five Australian models hints towards a negative Indian ocean dipole during the upcoming monsoon season.

‘Japanese worry too – Little cautious at the moment!’ 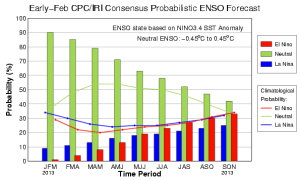 Earlier, signs of El-Nino were seen

The Japanese on the other hand were the first to point out that negative Indian ocean Dipole would develop this year though they are little cautious this year as their model failed last year to predict the sudden development of positive Indian ocean dipole during last days of monsoon season that in return caused heavy flooding in parts of Sub-continent.

According to their model, monsoon could create some problems in some places of north-eastern, central and adjoining north-western parts of India though at the same time,  the same model that is forecasting for Negative Indian Ocean dipole is forecasting a weak La-Nina later in the season.

Temperatures across the world’s ocean

South Korea-based Asia-Pacific Climate Centre have ruled out that there will be below normal rains this year in the sub-continent. Their model expects overall normal to above normal monsoon rainfall during June and July while slight decrease in rain-coverage in the month of August. 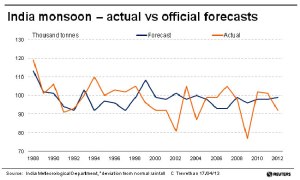 IMD’s forecast over the years

The forecast of Indian Meteorological Department (IMD) has not mentioned the Negative India Ocean Dipole development, in simple words they have completely neglected the Indian ocean Dipole phenomenon therefore they believe on a normal monsoon season. 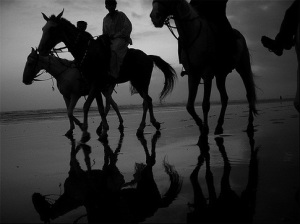 Karachi beach during a monsoon season

It was feared that the low pressure that formed in the Arabian sea off the coast of Oman, if it intensifies then it would drag the moisture away from the sub-continent thus causing a delay in monsoon’s westward advancement but the monsoon was saved as the low pressure near Oman fizzled though some decrease in thunderstorm activity over western India coast did occur which will improve in few days  and a second depression BOB 02 formed in the Bay of Bengal that moved towards north-eastern areas of Indian causing monsoon onset over many parts of India. Following are the important dates on which monsoon arrived over the sub-continent;

Two low pressures formed in the Arabian sea both were unimportant for the sub-continent. In the both of Bay of Bengal, two depressions formed, in which one of intensified into a cyclone ‘Mahasen’.

Early Monsoon has been vigorous

So far the sea surface temperatures of the Pacific ocean are neutral though later this year a weak La-Nina can develop during late July/August and during this period the negative India ocean dipole is expected to peak, both of these phenomenons will influence the monsoon season. So far the monsoon has been vigorous over India as 26% above normal rainfall has occurred. From June 9, the monsoon coverage in the sub-continent would increase significantly. Two low pressure from the Bay of Bengal can move towards central India, another circulation can form in the North Arabian sea.

Pakistan Weather Portal (PWP)’s monsoon forecast that was issued on May 6 has been revised on June 6, following is the forecast of PWP;

“Monsoon 2013 would set in early this year in India due to the formation of a low pressures in Bay of Bengal, Monsoon will be very active in the month of June as there is a possibility of pre-monsoon in Sindh and Punjab, moderate to heavy downpour can occur in Punjab (including Lahore) and Sindh (including Karachi) during the late midweek and last week of June due to the weak Madden-Julian Oscillation (MJO) wave. Eastern & western winds interaction possible during this period of June and later in the season in upper areas of Pakistan which could lead to heavy rainfall over Khyber Pakhtunkhwa as well. Monsoon onset in Pakistan can take place in the last weeks of June/first week of July especially in the northern areas of the country. Pakistan can experience near to normal rainfall in June till early July on the wider-scale while normal to below normal rainfall after mid-week of July till August as a whole. North-eastern Punjab and Azad Kashmir can witness some frequent heavy downpour in the month of July. Due to the high possibility of the formation of negative Indian ocean Dipole, rain activity could be significantly hampered from mid-week of July and in August, a partial effect of weak La-Nina might be observable later in the monsoon season (which could  weaken the effect of -IOD in September). However an event of isolated flash flooding/urban flooding (happens every year) can never be ruled out.”

51 thoughts on “Monsoon facing the biggest challenge from its own Ocean!”