Before Monsoon: Extreme heatwave – Not ended! 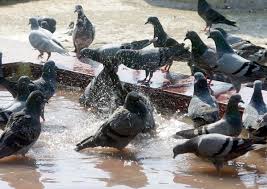 Pigeons try to beat the heat!

High temperatures does not necessarily leads to Pre-monsoon, a common misconception. It is worth-mentioning that the extreme heatwave that gripped Pakistan and western & central India in May was the longest and strongest heatwave since 2010’s record breaking temperatures in the region.

This extreme heatwave has ‘weakened’ but not broken in the region. The heatwave that started from the mid week of May is still active though some weakening did occur during the last weekend of May due to non-monsoon development that occurred over the northern areas in the form of western trough ’08’ that affect the northern areas of the country from May 24 night till May 27 morning. Western trough ’08’ brought severe hailstorm to the Pakistani province of Khyber Pakhtunkhwa. Western trough ’09’ that affected the northern areas from June 2/June 3 with strong dust storms did not cause any significant change in temperature. This heatwave will continue till the mid week of June unless pre-monsoon activity starts.

Brief showers in June in Karachi

Pre-monsoon activity was observed in Sindh including Karachi due to the formation of weak tropical depression ARB 01 in the Arabian sea on June 23. The storm caused light rainfall with fast winds in the coastal belt. 3 mm rainfall was recorded in Karachi due to this depression. On June 25, the remnants of ARB 01 helped the formation of another weak tropical depression ARB 02 which was just 300 km away from Karachi, it however caused windy condition in the coastal Sindh. No pre-monsoon activity occurred in upper parts of the country, western disturbance (non-monsoon weather system) however caused rainfall in those areas.

On June 2, a strong tropical storm “Phet” in the Arabian sea intensified into a category-4 hurricane. Cyclone caused heavy rainfall with strong winds over Sindh province on June 6 and June 7. Karachi got 152 mm rainfall during this period, the remnants of Phet brought drizzle/showers to south Punjab. On June 14, some Pre-monsoon currents from the Arabian sea caused light rainfall with strong winds in Punjab.

A Tropical storm 01A that was a depression on the Indian Meteorological department scale (IMD) brought clouds from the eastern direction over some parts of Sindh coast including Karachi on June 11 night.

Due to presence of moisture over the Arabian sea and moist winds of western trough, northern areas of the country experienced pre-monsoon showers in Islamabad, Lahore, Multan, Peshawar, Faisalabad, Muzaffarabad and other cities, the intensity was localized heavy in some areas. This activity started during the last weeks of June.

Monsoon rain on June 13 in Mithi

Pre-monsoon activity started in south-eastern Sindh from June 12 and lasted till June 15 with some showers in between. Moderate showers occurred in these parts on June 13;

After June 15, no area of Pakistan has experienced any pre-monsoon activity. A weak spell of rain occurred in Punjab that was termed by the Pakistan’s National Met Office as pre-monsoon rain in reality these showers were a direct result of westerlies that have been dominating the north-western sub-continent for the last few days.

As written by PWP in Monsoon II on May 6, there are chances of pre-monsoon activity in Sindh as well as North-eastern Punjab. The expected rains can occur during the middle of June.

Pakistan Weather Portal (PWP)’s monsoon forecast that was issued on May 6, which is stated below;

“Monsoon 2013 would set in early this year in India due to the formation of a low pressures in Bay of Bengal, overall it could be normal on the wider scale in Pakistan and India due to the neutral ENSO conditions in the Pacific ocean till October. Pakistan can get monsoon rains during the first week of July. Westerlies and Easterlies interaction could lead to heavy flooding rainfall over the rivers of Punjab and Khyber Pakhtunkhwa, westerlies could increase their presence in late May and June. Rains could be normal in southern areas while near normal in northern areas. North-eastern Punjab and Azad Kashmir can witness some frequent heavy downpour in the month of July. Slight possibility of pre-monsoon activity in Sindh and North-eastern Punjab only. However an event of isolated flash flooding/urban flooding (happens every year) can never be ruled out.”

28 thoughts on “Look back at Past: Pre-Monsoon rains are just around the corner?”