Very active monsoon season was seen during the last one week in Pakistan especially in Sindh province which has received much rainfall than any part of Pakistan this monsoon season. Upper parts of Pakistan mainly saw isolated to scattered rainfall activity. Temperatures remained low due to enhance monsoon activity while humidity remained high. Severe destruction has occurred in Sindh province due to 2nd and 5th monsoon spell.

Present conditions over Pakistan – (Only for September 9 to 10)

Isolated to scattered thunder/rainfall may occur at few places of upper Pakistan in 48 hours, while the 5th monsoon spell has ended in Sindh, however there are chances of few isolated rain/showers in some upper and eastern parts of the province till 24 to 36 hours.

Monsoon is likely to continue till September 15 in Pakistan, beyond that the future of the monsoon is uncertain, however there are some indications that monsoon may continue till the end of the month at least in upper Pakistan. More over monsoon rainfall has been in Sindh at least 180% above than its normal, leaving the wettest areas of Punjab, Khyber and Kashmir far behind.

“Notice: This is the forecast from Pakistan Weather Portal (PWP), we are 60% confident with this prediction. There will be slight variations in our forecast as certain meteorological factors develop and fade as time passes by and these factors are too isolated to be noticed on numerical charts or models. According to various meteorological parameters this forecast has been made.” 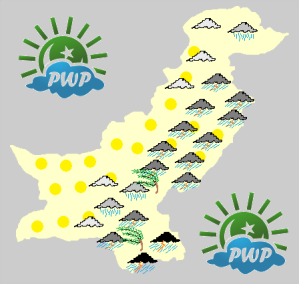 As of 10:00 pm PST September 9, Various models, numerical charts and other meteorological parameters observed by PWP indicate that;

*This spell may resemble the 2nd monsoon spell, but as of September 10 it is likely to be slightly week and small in duration than the 5th spell.

Following is the weather forecast that is expected;

Thunder/Rainfall may occur in 24 to 48 hours in the capital after that the weather is expected to calm down a bit and from September 11/September 12, monsoon winds will shift to upper parts of Pakistan and then Thunder/rainfall is expected, it will be light to moderate intensity and continue till few days with few gaps .

Mercury is expected in Islamabad;

In Northern Punjab: Lahore, Faisalabad, Murree, Rawalpindi, Sargodha, Sialkot and other adjoining cities. Rainfall with scattered moderate falls expected to continue till few days with few gaps, the monsoon flow from Sindh could reach north Punjab on September 12. Rain will be accompanied by thunder and fast winds.

Following is the temperature forecast for Northern Punjab;

In Southern Punjab: Bahawalpur, Multan, Rahim Yar Khan, D. G. Khan and other adjoining cities. Rainfall will be  moderate falls expected to continue till few days, the monsoon flow from Sindh could reach south Punjab on September 11 night. Rain will be accompanied by thunder and fast winds.

In Upper Sindh: Sukkur, Larkana, Jacobabad, Kashmore, Nawabshah and other adjoining  cities. The fresh monsoon winds will enter from September 11 and continue till 2 to 3 days, mainly till September 14. Rain will be accompanied by winds and thunder, it will be moderate in intensity with chances of isolated heavy falls.

In South-eastern Sindh: Mirpur khas, Umerkot, Tharparkar, Badin and Hyderabad. The rainfall could occur from September 11 till September 13 during this period heavy rainfall may occur in Eastern Sindh and till September 14. Rain will be accompanied by fast winds and thunder, it will be mostly heavy in intensity with chances of scattered heavy falls in some eastern parts.

Temperatures will also calm in south-eastern Sindh due to long spell of very heavy rainfall during last few days.

In coastal Sindh: Karachi, Thatta, Keti, Shah Bandar and other coastal localities. The 6th spell has reached some parts of Sindh on September 10. Rain will be accompanied by fast winds and thunder, it will be moderate in intensity in Karachi with chances of isolated heavy falls while chances of isolated to scattered heavy rainfall in Keti Bandar and Thatta. Chances of rainfall will persist will September 14, then a decrease is expected.

Due to frequent cloud over and fast winds the mercury in Karachi and other coastal cities has remained unchanged since July 1;

This monsoon activity will continue till September 14 with peak intensity, after that the intensity will decrease. Monsoon may start to withdraw from some parts of the country.

Weather death-toll rises sharply due to rainfall in Sindh

At least 347 people have died in Pakistan since June 25 due to heavy rainfall, wind storm, heat waves, floods and other weather-related incidents. 134 people died in Sindh during the 11-day stormy rainfall in Sindh.

Poll of the week