‘The Dark Winters bring sadness to some’

Do not want to get up in the morning, have little energy, feeling depressed, increased appetite, weight gain, headache or feeling lonely are all the symptoms of seasonal affective disorder –  which could be shortened to SAD amazingly.  There is no doubt that when you suffer from this disorder you are ‘SAD’.

What is Seasonal Affective Disorder (SAD)? 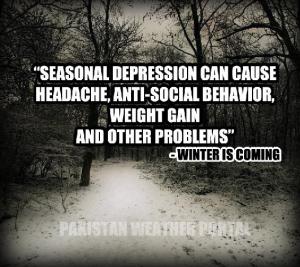 SAD is a disorder that is related to the weather or climatic patterns prevailing over the region. SAD is a depression that mostly occurs in dry season that are autumn and winter however few cases have come forward in which people get depression from spring and summer season.

SAD is also termed as ‘Winter depression’ as most people suffer from the disorder in cold parts of the world. This disorder is not life threatening and could be treated with therapy. Our body only wakes up in the morning when it get sunlight  however as the time of sunrise and sunset changes in summer and winter therefore our body gets confused. The people in village get up early due to sunlight shining into their houses.

Why does it occur?

It occurs mainly in cold areas of the world like Alaska  Canada, Russia, Ireland, northern United States and other cold areas of the globe. In the cold regions, people are exposed to limited sunlight which is considered the main reason for the disorder as the sun sets earlier.

According to a survey, about 20% of Irish people while 10% people of Netherland suffer from SAD.

How to move from SAD to happy?

People feel better after exposure to bright light which is a therapy, if people cannot get natural sunlight then they should replace that with bright artificial light and see the difference. Other then that people should do the following things;

This disorder is not much highlighted in Pakistan however PWP’s Facebook page asked the people about the seasonal depression in which most of the people were divided between summers and winters, depression in summer among southern Pakistanis is quite understandable as that part mostly remains dry and sunny.

PWP would be holding a poll to get the answers from large audience;