‘Pakistan under severe heatwave since 10 days’

It keeps getting hotter!

The cultural hub of the country came close in setting a new all time high temperature on May 23 as the highest temperature in the month of May occurred in 1990 (23 years ago) that was 47.4 °C according to NOAA. On May 23, the severe heatwave that has engulfed much of Pakistan since mid of May caused the temperature to rise at 47 °C thus coming close but not breaking the monthly temperature.

From May 18 till May 23, Lahore has witnessed new high temperature record for the day, following are recorded temperature;

When will Lahoris be free? 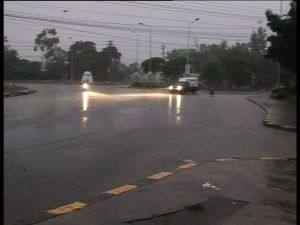 Rain and Dust storm is the solution!

Well, it is well known that load-shedding is intolerable in the city therefore the relief has to come from nature. From tomorrow there are chances that temperatures might start decreasing in the northern areas including Lahore. Tomorrow the mercury can be at 45 °C till 46 °C in Lahore. From May 24 night/May 25, a western trough ’08’ is coming to the northern areas that could bring drizzle/isolated showers with dust storms to those parts. Mostly cloudy with sudden dusty winds can occur in Lahore during the weekend with further drop in temperature.

The heatwave is under control for long!

On May 8, PWP predicted that a strong heatwave would affect Sindh from the coming week of May. On May 15, it gripped the entire country and gradually intensified on May 16/May 17. This heatwave will continue till the end of May as written in Monsoon III. Though some decrease of 2°C to 5°C from current situation could occur in the northern areas while slight decrease would occur in the central and southern parts. The heatwave would weaken by the first week of June.