New Update is issued on July 4 –  Go Below

Temperature and Precipitation till July 5

Monsoon has advanced into the northern areas of the country mainly Azad Kashmir, Khyber Pakhtunkhwa and northern Punjab on June 27. Last rains (pre-monsoon) that occurred in the country was on June 16/June 17. After that rain (monsoon) again started falling from June 25. On June 26, 65 mm rain fell in Murree, Punjab while on June 27, 71 mm rain fell in Bannu, Khyber Pakhtunkhwa. The first spell of monsoon rains is mostly moderate and it has become significant only due to the western trough ’11’, the rains can continue till early first week of July. Across the border, North-western India had one of it’s worst flood in years with fresh heavy rain falling near the flood-hit areas.

*Western trough ’11′ is over the north-western areas of the country.

“Notice: This is the forecast from Pakistan Weather Portal (PWP), we are 80% confident with this prediction. There will be slight variations in our forecast as certain meteorological factors develop and fade as time passes by and these factors are too isolated to be noticed on numerical charts or models. According to various meteorological parameters this forecast has been made.” 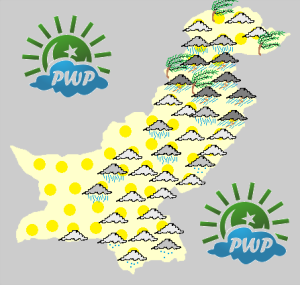 Pakistan Weather Portal (PWP) successfully predicted the onset of the pre-monsoon activity in the country as PWP’s pre-monsoon forecast was around June 14 (+2,-2 day error), PWP on June 4 told that scattered to widespread pre-monsoon can occur in the country and on June 8 PWP told that very heavy rainfall can occur in NE Punjab though SE Sindh did not get the ‘expected intensity’  rains. For the onset of Monsoon, PWP in it’s Monsoon V published on June 6 did say that monsoon onset can happen during the last week of June/first week of July while on June 23 (upgraded the chances of monsoon to ‘extremely high’ on June 26), PWP said that monsoon onset can occur in the northern areas on June 26 (+1, -1 day error), isolated rains started June 25 while monsoon advanced into these areas on June 27.

As of 5:00 pm PKT June 28, Various models, numerical charts and other meteorological parameters observed by PWP for the track of developing weather systems are shown as;

*On June 22, a low pressure formed over Bay of Bengal and moved in a WNW direction towards Odisha coast on June 24, the next day it lied over North Chhattisgrah. On June 27, it was over south-east Utter Pradesh with some deepening. This low pressure had an encounter with the western trough ’11’ over the north-western areas of Pakistan on June 27 that will cause the low to persist till next two to three days over the some area, the moisture will cross into Nepal and China. The interaction with the western system can cause some thunderstorms to form north-eastern parts of Pakistan on June 28 night/June 29. There is another possibility (only GFS) of a circulation/low forming over the central parts of India that will merge with the monsoon axis over Himalayan ranges over the northern India during the first week of July. 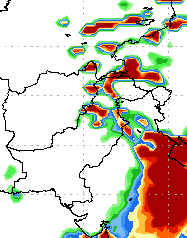 Rain coverage in the north – above 25 mm seen

Rain with chances of isolated heavy falls can occur in capital from June 28 night till July 1 with intervals. Rain will be accompanied by thunder/lightning and strong winds (>56 km/h).

Day mercury is expected in Islamabad;

Most rain has occurred in Khyber Pakhtunkhwa during the current spell. Rain with thunder/lightning along with strong winds (>56 km/h) can occur in Khyber Pakhtunkhwa.  There are chances of isolated heavy falls in Khyber Agency, Landi Kotal, Orakzai Agency, Khurram Agency including Parachinar, Abbottabad, Haripur, Manshera. The provincial capital of Balochistan Quetta would remain dry with partly cloudy sky. There are chances of isolated rain in Khuzdar, Kalat, Awaram, Zhob, Musa Khel, Barkhan and few adjoining districts during this period.

Following are the day temperature expected;

Following is the day temperature forecast for Northern Punjab;

In Southern Punjab: Bahawalpur, Bahawalnagar, Multan, Rahim Yar Khan, D. G. Khan and other adjoining cities are expected to remain dry with passing clouds.  However showers with windy conditions can occur in Dera Ghazi Khan district on June 28/June 29 while isolated shower can occur in Bahawalnagar districts on June 29/June 30. Overall the temperatures are high in this part of Punjab.

In Southern Punjab, day temperatures will be higher than Northern Punjab;

In Upper Sindh: Sukkur, Larkana, Jacobabad, Kashmore, Nawabshah and other adjoining  cities. Mostly dry conditions are expected with increase in clouds during the night in NW parts of upper Sindh. Overall the temperatures are high in this part of Sindh.

Following is the range of day temperatures expected in this part.

In South-eastern Sindh: Mirpur khas, Umerkot, Tharparkar, Badin and Hyderabad. Mostly dry weather expected with increase in clouds during the night/morning  while there are chances of showers with thunder/lightning in Tharparkar district.

Following are the day temperatures, high temperatures are prevailing in this part of Sindh as well.

Temperatures have returned to their calm level in the coastal belt.

The first spell will weaken significantly on July 1 though since the monsoon has advanced into the northern areas therefore the moist-laden winds will prevail with chances of drizzle/isolated showers in few areas of northern areas. The second spell can hit the northern areas during the late first week of July/second week of July. Proper monsoon rains in the central and southern areas of the country are not seen at moment.

People are eager to know when will they get their share of rains! Monsoon mostly advances into Karachi during the mid-week of July.

Precipitation and Temperature till July 11

*Fresh circulation can form in the Bay of Bengal on July 6/July 7.

Recap of the first monsoon spell

The rains were isolated heavy in intensity especially over western Khyber Pakhtunkhwa and northern Punjab. Following are the highest rainfall recorded the first monsoon spell (above 40 mm);

The monsoon spell started from June 25 with weak intensity and gained strength on June 27 and weakened significantly on June 30 though isolated rain continued till July 1. After July 1, temperatures started rising in the some parts of the country. The first monsoon spell was more focused in Khyber Pakhtunkhwa due to western trough ’11’ however top cloud temperature showed that monsoon moisture played a significant role in the rains. 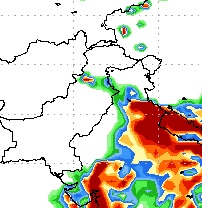 Above 50 mm rain in North

Mostly dry weather expected till July 5 with chances of thundercloud formation near northern Punjab that can being drizzle/showers with thunder/lightning. Second Monsoon spell is expected from July 7 (+1,-1 day error), rain with thunder and lightning along with fast/strong winds can occur in many places of the northern areas. Rain at times heavy (isolated very heavy in few areas) can occur on July 8 till July 10 early in the Northern and North-eastern districts of Punjab (Lahore, Sialkot, Gujranwala, Faisalabad, Sheikhpura, Rawalpindi (including Murree city), Jhelum, Gujarat, Mandi Bahauddin and few adjoining areas). During the second spell, 45 mm till 110 mm is being showed in various areas of upper Punjab. Rain with thunder and lightning is also likely in Islamabad especially during July 8 and July 9.

North-western areas of Punjab that is Attock, Sargodha and adjoining areas can also witness rain with thunder and lightning during this period. Rain with thunder/lightning also likely in Azad Kashmir including Muzaffarabad however there are chances of isolated heavy falls in Kotli, Mirpur and adjoining cities of the state. 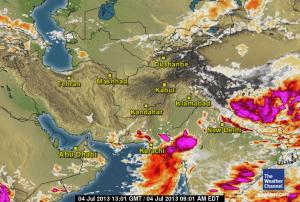 Thunderclouds near Sindh on July 4

Mostly dry weather expected in this part (South Punjab and Northern Balochistan) of the country however there are chances of drizzle/isolated showers with thunder and lightning in Bahawalpur, Bahawalnagar, Rahim Yar districts of south Punjab due to the closeness of a thundercloud formation over West Rajasthan. Partly/Mostly cloudy weather can occur in Multan, DG Khan and adjoining areas.

Partly/Mostly cloudy conditions with chances of drizzle in Barkhan, Musa Khel districts of Balochistan while dry with passing clouds in Quetta.

Thunderstorms due to a circulation associated with low pressure over East Rajasthan and adjoining Madya Pradesh, these thunderclouds would be crossing south Gujarat and adjoining Sindh till next few days. Chances of isolated shower/light rain in Karachi, Tharparkar, Umerkot, Sanghar, Khairpur, Badin, Jamshoro, Thatta and adjoining areas. In Balochistan, there are chances of drizzle/isolated showers in Awaran, Khuzdar, Panjgur and adjoinig districts of Balochistan.

Monsoon moisture is continuously penetrating into Sindh while it is weak in South Punjab, monsoon can advance into Sindh and South Punjab during early mid-week of July as a fresh low pressure can bring rains to Sindh on July 13/July 14. PWP will monitor this situation again.

Poll of the Week

Pakistan Weather Portal (PWP) wanted to know your thoughts and by far 160 votes have been casted, 30.6% people believe that monsoon will cover the country by the last week of july while 20% believe that it will happen during the second week of July;